I recently came across this amazing piece of writing by Caitlin Feeley, which perfectly describes what it feels like to go through breast cancer treatment. Mascara warning!

“F*ck this mountain” by Caitlin Feeley

What’s it like to go through cancer treatment? It’s something like this: one day, you’re minding your own business, you open the fridge to get some breakfast, and OH MY GOD THERE’S A MOUNTAIN LION IN YOUR FRIDGE.

Wait, what? How? Why is there a mountain lion in your fridge? NO TIME TO EXPLAIN. RUN! THE MOUNTAIN LION WILL KILL YOU! UNLESS YOU FIND SOMETHING EVEN MORE FEROCIOUS TO KILL IT FIRST!

Also, for some reason, there’s someone in the crowd who’s yelling “that’s not really a mountain lion, it’s a puma” and another person yelling “I read that mountain lions are allergic to kale, have you tried rubbing kale on it?”

As you’re running up the mountain, you see other people fleeing their own mountain lions. Some of the mountain lions seem comparatively wimpy – they’re half grown and only have three legs or whatever, and you think to yourself – why couldn’t I have gotten one of those mountain lions? But then you look over at the people who are fleeing mountain lions the size of a monster truck with huge prehistoric saber fangs, and you feel like an asshole for even thinking that – and besides, who in their right mind would want to fight a mountain lion, even a three-legged one?

Finally, the person closest to you, whose job it is to take care of you – maybe a parent or sibling or best friend or, spouse – comes barging out of the woods and jumps on the mountain lion, whaling on it and screaming “GODDAMMIT MOUNTAIN LION, STOP TRYING TO EAT MY WIFE,” and the mountain lion punches your husband right in the face. Now your husband (or whatever) is rolling around on the ground clutching his nose, and he’s bought you some time, but you still need to get to the top of the mountain.

Eventually you reach the top, finally, and the bear is there. Waiting. For both of you. You rush right up to the bear, and the bear rushes the mountain lion, but the bear has to go through you to get to the mountain lion, and in doing so, the bear TOTALLY KICKS YOUR ASS, but not before it also punches your husband in the face. And your husband is now staggering around with a black eye and bloody nose, and saying “can I get some help, I’ve been punched in the face by two apex predators and I think my nose is broken,” and all you can say is “I’M KIND OF BUSY IN CASE YOU HADN’T NOTICED I’M FIGHTING A MOUNTAIN LION.”

Then, IF YOU ARE LUCKY, the bear leaps on the mountain lion and they are locked in epic battle until finally the two of them roll off a cliff edge together, and the mountain lion is dead.
Maybe. You’re not sure – it fell off the cliff, but mountain lions are crafty. It could come back at any moment.

And all your friends come running up to you and say “that was amazing! You’re so brave, we’re so proud of you! You didn’t die! That must be a huge relief!”

Meanwhile, you blew out both your knees, you’re having an asthma attack, you twisted your ankle, and also you have been mauled by a bear. And everyone says “boy, you must be excited to walk down the mountain!” And all you can think as you stagger to your feet is “f*ck this mountain, I never wanted to climb it in the first place.”

Find Me
Latest posts by Helen Aldous (see all) 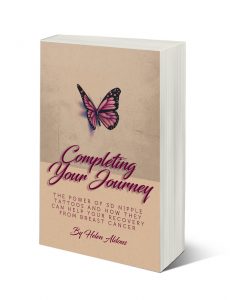 I have written an E-Book to answer questions about 3D Nipple Tattoos. It covers topics I get asked most frequently and outlines the process and its benefits. You can easily download the E-Book to your laptop or tablet to read at your leisure.

Healing After Your Breast Cancer Journey