I was honoured to have my story of how I came to tattoo 3D Nipples and Mastectomy tattoos featured on the Macmillan Forums Community Website.

If you haven’t already discovered the Macmillan Forums, they are invaluable if you have dealt with cancer, now or in the past. They are full of good and reliable information and a lovely supportive group of admin staff, nurses and members. Highly recommended as a support throughout your cancer journey. 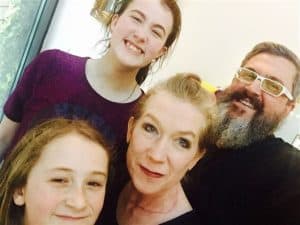 Helen Aldous, 48, is a Tattooist from Holmfirth, near Huddersfield in Yorkshire. When her mum developed breast cancer she realised that with her blend of artistic and tattooing skills she could create permanent 3D Nipple Tattoos which wouldn’t fade, for people who had undergone a mastectomy. She began creating realistic Nipple Tattoos in 2016 but fate had other ideas… In 2017 Helen was diagnosed with thyroid cancer and had to undergo a total thyroidectomy, neck dissection and radioiodine treatment…

The healing power of Nipple Tattoos

Around six years ago I started working in my dream job, as a Tattooist. I soon discovered that the tattoos I enjoyed doing the most were the ones that helped people heal mentally. People have tattoos for some very personal reasons, to cover self harm scars for example. I saw first hand how tattoos can facilitate a sense of mental healing, allowing people to deal with trauma and move forward to find peace in their lives. I loved this work and began to specialise in this area.

In 2014 my Mum was diagnosed with breast cancer. She opted for a unilateral mastectomy. However, when we looked through the information about options for nipple restoration we realised the limitation of what was available to her. Mum didn’t want the bother of dealing with prosthetic stick on nipples. She was told she could have a nipple tattooed on her reconstructed breast but would have to keep returning to have the nipple re tattooed as the semi-permanent ink would fade. By this time Mum was sick of surgery and really didn’t want to keep returning to be tattooed every couple of years. She just wanted to put a full stop after her cancer treatment and so opted to have no reconstruction so she could get on with life.

Another option for Breast Cancer Warriors

This experience got me thinking about the lack of choices for breast cancer warriors. I realised that my combination of artistic background and tattoo skills put me in the perfect position to offer another option for people who had been through the trauma of breast cancer and mastectomy. I could create realistic looking 3D nipple tattoos which were permanent. People wouldn’t have to keep returning for more work on already delicate and damaged skin, allowing them to put treatment behind them.

I started to create permanent 3D Nipple tattoos on existing clients who had gone though cancer. Word soon spread and a steady stream of people came to receive new nipples.  I heard first hand from my clients about the battles with body confidence and how the lack of a nipple can make your new breasts feel alien. I heard about the “drive by” when you catch a glimpse your new breasts in a mirror and are struck by the lack of nipple and how this can impact your feelings. I heard that many breast cancer warriors feel there is no end to their journey and surgery. They have a lack of closure, especially if their replacement nipples keep fading and they keep having to return for more treatment. They never get to draw a line under the cancer. The stories I heard made me even more determined to get the word out about the permanent alternative. It’s amazing the difference a small two inch tattoo can make to peoples lives.

At first I thought I was working too hard when I started to feel ill and exhausted. A large lump appeared on my neck, worrying my GP. I insisted I was just run down but he fast tracked me for a biopsy and within a few weeks I was sat shaking in a surgeons office as he told me I had thyroid cancer. The petrifying cancer treatment rollercoaster began, first with a thyroidectomy and then an extensive neck dissection to remove 42 lymph nodes. This was followed by Radioactive Iodine treatment where I had to be isolated in hospital away from my family in order to protect them from the radiation I was emitting. Being separated from my two kids was the hardest part, especially as it was just before Christmas and they wondered if I would be released in time to spend Christmas day with them.

I had to leave the lovely tattoo studio where I worked as I was so weak after the surgery and had nerve damage in my neck and shoulder. Tattooing was an impossibility. Things seemed very dark at times as I struggled to balance the replacement thyroid hormone medication I now needed to stay alive. I needed time to heal and was looked after amazingly well by my family. Slowly I started to recover.

Throughout my journey I had wonderful care and treatment from the NHS for which I have huge gratitude. Going through cancer changes you deeply as a person and although I wish the cancer had never happened, for me it has had a silver lining in that it has given me a deep understanding and empathy of how we journey through cancer.

Cancer taught me what I needed to do with my life. As I recovered, my goal became to create a safe, private and non medicalised place for breast cancer warriors to receive their nipple tattoos, the finishing touches to their reconstructed breasts.

On a mission to payback the love

When my energy started to return I worked on plans for a new tattoo studio. I wanted to make Nipple Tattoos and Mastectomy Tattoos available for everyone in Yorkshire and beyond. My wonderful husband put in endless hours painting walls, installing fittings and even painstakingly laying a beautiful wood floor. Soon I could open the doors to my studio. I named it Secret Garden – Healing Tattoo Art. Its a bright calm and airy private space and as the name implies opens onto a little garden which adds its own healing magic.

I feel grateful every day that I have found my life’s mission of creating 3D Nipple Tattoos, mastectomy tattoos and body art that helps people to heal after cancer. Its so much more than just a job.

My goal is to help people reach the end of their treatment rollercoaster in a safe and caring environment and to pay back some of the care and love I received on my cancer journey.

View a gallery of my 3D nipple Tattoos here